It’s been a while since I’ve had a Weekend Reading List for you, but never fear: here’s a selection of stuff to keep you busy as you gear up for the new year:

In 2005, Jane Fonda was featured in an episode of Inside the Actor’s Studio and, while talking about Barbarella, her 1968 campy, sexy science fiction film, mentioned something that I haven’t been able to forget. “If I could do it over,” she said, “I could rewrite it, and it’d be a powerful feminist story, but it would be just as sexy and as funny.”

Later on, in 2011, she told the LA Times that she’d love to do a sequel, so revisiting Barbarella is clearly of some interest to her. A sequel, however, isn’t going to fix the original film. Based on Jean-Claude Forest’s French comics of the same name, the movie tells the story of space explorer Barbarella, who, while traveling in her ship, receives an urgent message from the President of the Republic of Earth. A scientist, Durand Durand, has escaped, and is thought to be building a weapon for intergalactic war near Tau Ceti. Barbarella is tasked with finding him and thwarting his plans.

After crash landing on the planet, Barbarella is taken captive, only to be rescued by the Catchman. From him, she learns the wonders of sex (for centuries people on Earth have been reproducing telepathically when their psychocardiograms are in sync). She gets back in her spaceship only to crash again, this time in the Labyrinth of exiles. There she meets the winged Pygar, the last of the ornithanthropes, and together they travel to Sogo, a city built on top of the Mathmos, a lake of liquid energy that feeds on evil psychic energy (it’s a weird movie). 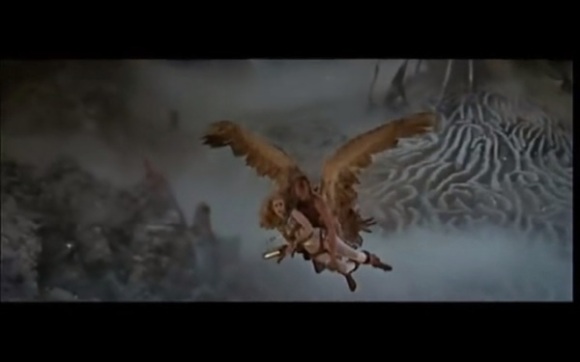 The film is a silly 1960s free love space romp that barely deserves to be taken seriously. Nevertheless, it’s not exactly going to be winning any awards for its respectful representation of women. Still, there’s potential, so let’s see what Barbarella would be like, if it were feminist:

1. Have someone other than a predator explain human reproduction to Barbarella

I’m totally on board with a tale of sexual awakening, but having a lecherous hump explain sex to our protagonist while practically salivating is maybe not the most empowering way to do it. (Seriously, Barbarella thanks him for saving her, and asks what she can do for him, and he doesn’t miss a beat.) Instead, let’s have Barbarella learn about it on her own. Maybe she catches a glimpse of a couple going at it in a space garden? That seems appropriately sexually liberated for the time period.

In the movie, once sex has been explained to her, she is disgusted and wary. It’s only after the act that she realizes how much fun she had. Having her show real enthusiasm and excitement right off the bat would go a long way in making Barbarella someone with agency, rather than a sexy doll passed from rescuer to rescuer. Let’s aim for a bit more enthusiastic consent than “well if you simply must insist, I guess so.”

2. Give the lady some flaws

Let’s recap what we know about Barbarella. She’s a “five-star, double-rated, astronavigatrix,” is beautiful, kind, and without malice. She is important enough to receive direct calls from the President, but is also endlessly sexually available to men. She’s a pacifist who hates weaponry, but is a crack shot and takes down foes with ease. She’s sexy. She triumphs. She’s also totally flat. She’s a blank slate onto which is projected a rudimentary Space Babe fantasy. Star Trek‘s Orion slave girl has more personality. What if Barbarella had such an aversion to violence that she refused to use it even when it could save innocents? That would fit with her extreme pacifism. She could have a crisis of faith, wondering if she should abandon her principles. Or, since we’re trying to keep the sexiness, she could enjoy her newfound pastime so much that she gets distracted from her mission. Honestly, having any sort of character development would be a step up.

This is another instance of the movie betraying its age. The President contacts Barbarella directly, praising her and telling her that she’s the only one who can prevent intergalactic war, but constantly refers to her as a girl. She’s an adult, she can be innocent and good without being infantilized.

4. Barbarella can, and should, have sex for herself

This movie is supposed to be about Barbarella and her sexuality, but every sexual encounter—either physical or telepathic—is for someone else’s benefit. The Catchman? To pay him back for saving her. Pygar? To help him “regain the will to fly” (and also to thank him for saving her). Dildano the revolutionary? Again, as payment for rescue. The sex, even when Barbarella is clearly into it, is never about her. Even when she destroys Durand Durand’s Evil Machine of Sex, it’s because she was able to endure the extreme pleasure it was doling out. What if, instead, Barbarella finds out that she gains power from her sexuality? She could still be the wide-eyed naif of the original, but sex would make her stronger. Instead of showing her exhausted and weak after her tangle with the machine, why not have her glowing, laughing at the puny man who thought to vanquish her? 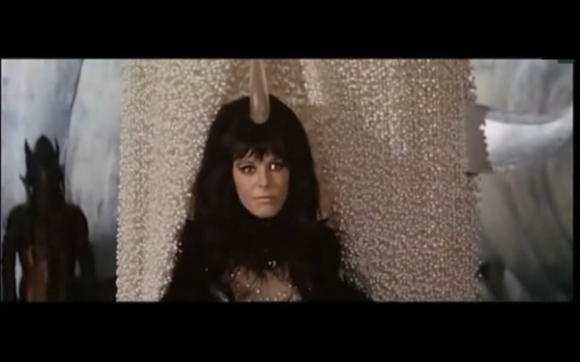 The way the Great Tyrant of Sogo looks at Barbarella and calls her “pretty-pretty,” it was a huge missed opportunity for the original film not to pair the two together. Seriously, you’re telling me that someone who until very recently didn’t know anything about sex would limit herself to three dudes after finding out how fun it is? That she’d stick to such a narrow, male-initiated, heteronormative type of sexuality? I don’t think so, and from the looks of it, the Great Tyrant agrees. Let’s have the epic showdown happen between these two powerhouses, both of whom gain energy from their sexualities, but one is good while the other is evil (due to the corruption of the Mathmos). See? You’d totally watch that. Also let’s make Pygar bisexual, just for the hell of it. Queer angels!

6. Not so much with the male gaze, okay?

And lastly, the four minute zero-G striptease is probably not such a good idea if you’re trying not to objectify your protagonist. Just saying. Ditto with the long panning shots of her naked, or near-naked, body. Or having the blind angel figure out what she is by groping her. Or having the wise elder ask “you are the female of the species, yes?” while nose-deep in her cleavage.

Despite its many flaws, I truly do enjoy Barbarella. The film is visually beautiful, and the idea that a heroine can have healthy libido and sexual agency and still be considered pure is an intriguing one. In fact, it’s perhaps why the movie has had such an enduring cult following. The potential is there, and with only a few minor tweaks, Barbarella could be a great film, leaving us free to enjoy the lava lamp and shag carpet goodness without worrying about its more problematic aspects. Jane Fonda, make it happen!

The hitchhiker’s guide to webcomics: Princess-palooza

Welcome to another round of webcomic recommendations! This week we’ll be talking about princesses, but don’t worry, these will not be your typical damsels in distress, your blushing maidens of yore. No, these will be ass-kickers, life-takers, strutters, and explorers.

(Side note: I’m just now realizing that my webcomic categories will likely have some overlap, so you’ll forgive me if YU+ME: dream and Curvy, featured earlier, technically involve monarchs.) 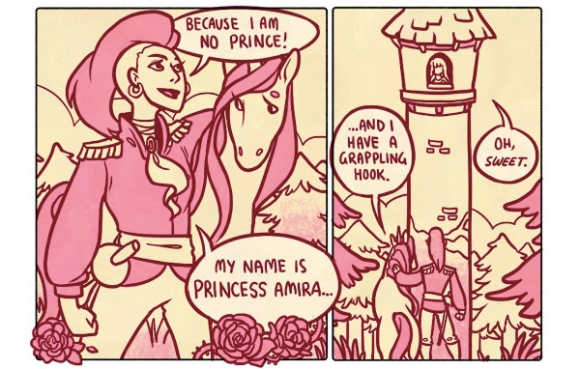 Once upon a time there was an exiled princess locked away in a tall, tall tower… Oh, you know this story, do you? No, no you do not. When Princess Amira frees Princess Sadie from her penthouse prison cell, all bets are off. There are baby dragons and cookie-loving unicorns and love that triumphs over evil, fatphobic family members. What more do you need?

Status: Finished! It’s very short, so you have no excuse.

Read if you like: Dancing ogres, mutual rescuing, the colour pink. 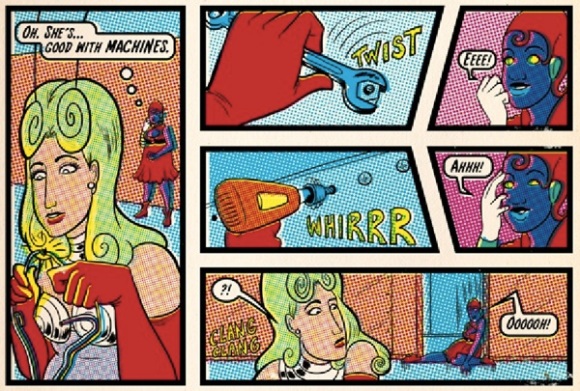 I Was Kidnapped by Lesbian Pirates from Outer Space, Megan Rose Gedris

Susan the secretary was just a normal Earth girl until Janet McSapphic and her crew of queer keelhaulers kidnap her and head for parts unknown. Will Susie ever see home again? Will they get away with their next heist? And who is the real princess of Lesbos-1? Find out in this wonderfully funny comic that lampoons everything from musicals to 1950s detective novels, all while passing the Bechdel test with flying (rainbow) colours.

Status: Finished, ran from 2006-2013. Due to copyright issues it’s no longer online, but I love it so much I’m recommending it anyway. Here’s a torrent.

Read if you like: Lady love, Barbarella, and pulp novels and The Odyssey.

Nimona, Noelle Stevenson (a.k.a. Ginger Haze of The Broship of the Ring fame)

I may be stretching the princess theme a little here, but in my world the definition of princess includes shapeshifting, cool-hair-having, supervillain sidekicks, and it’s my blog so I do what I want. She’s basically a knight and that’s close enough, okay? Anyway, Nimona is amazing. Together with the villainous-but-not-really Lord Ballister Blackheart, she tries to uncover sinister plots and prove that sometimes the Good Guys aren’t good at all. 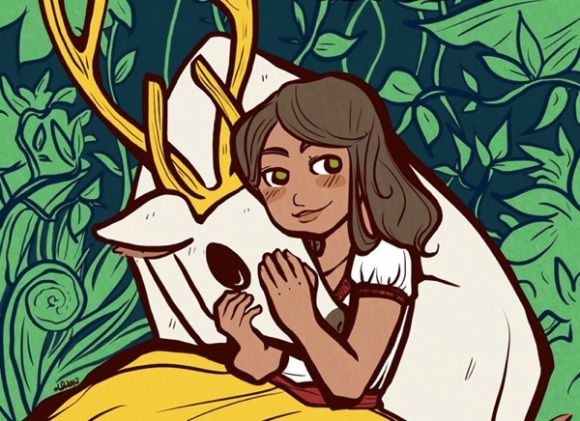 You’re probably familiar with the big names in Brothers Grimm fairytales, you know, your run-of-the-mill Snow White and Hansel and Gretel. But what about The Farmer’s Clever Daughter? Or The Sweet Porridge? Not so sure about those, are you? Never fear, Erstwhile is a treasure trove of little-known stories, beautifully adapted and illustrated, and is definitely worth the read.

Read if you like: Dark fairytales and lots of different art styles.