The portal to my heart

I’m almost ashamed to admit it, but I haven’t yet finished Portal 2. (Why yes, I am aware of its release date). In fact, I only managed to get to the end of the original Portal five years after it came out. But despite my chronic tardiness when it comes to video games, the franchise rapidly became one of my all time favourites. And so, in honour of my joining the ranks of those who play games on time like normal people, I’d like to revisit one of the most powerful moments I’ve ever experienced in game: The time I realized the disembodied hand holding my Portal gun belonged to a woman.

For those unfamiliar with the Portal franchise, the premise is simple. You play as a silent, orange jumpsuit-clad figure who, when furnished with a gun that creates portals in walls, must act as a lab rat, going through testing facilities and solving puzzles as if it were a labyrinth with a hunk of cheese at the end (except the cheese is cake and the cake is a lie) (play the game, you’ll get it). You can create two types of portals, an entrance and an exit, and these allow you to reach high platforms, evade obstacles (fun things like acid rivers and killer robots), and slingshot yourself across far distances, all in an effort to open the next door.

You know nothing about yourself, your backstory is unimportant. All that matters is surviving long enough to get to the next test. Your only contact with the outside world is GladOS, a chilling voice that alternately encourages you and informs you that you will never succeed. Who you are is the least of your worries. So when I happened to catch sight of myself through a conveniently placed portal, I was shocked to find out that I was actually a woman.

I was shocked because I didn’t need to be a woman. There was nothing in the story that necessitated that. I wasn’t the girlfriend of some rugged hero. I didn’t have to save my children. I wasn’t a well-known character from an already established franchise or the female equivalent of a famous male character. I just had a gun and solved puzzles.

This is basically all you see of yourself.

Video games tend to treat white, straight, cisgendered men as the default human being, a template that has mass appeal. If something happens to this benchmark human, everyone can identify with it, the story can reach more people. Conventional wisdom would have us believe that the more you add on to your default—be it race, gender, queerness—the more specific the experience, and the less universal your story. Though video games are not the only medium in which this happens, it’s insulting to think that white people could not possible identify with a protagonist of colour, that men could not identify with a woman, that any variation from the status quo makes the story less capable of speaking a capital-T truth. And this belief has real-world consequences. Despite the fact that women make up a huge percentage of video game players and purchasers, we’re still struggling to have any substantial representation in the genre. It’s telling that when I only saw a gun, it didn’t even cross my mind that the hand holding it could belong to anyone but a big, chiseled man.

When I saw the protagonist (whose name is Chell, though that information isn’t made available in the game itself), I felt real joy. It meant something so profound that this person, this person so like me, could be worthy of having her story told. I paused the game for a few full seconds, processing how deeply this realization had affected me. It may seem like a strong reaction, but the effect of never seeing yourself reflected back at you is feeling like you don’t belong, like you’re not deserving. In this one game, I was getting a different message.

I already liked Portal. The puzzles were challenging and got incrementally harder in such a way that I felt like I was improving at a good pace. The tone reminded me of Vincenzo Natali’s Cube trilogy (which I highly recommend if dark, independent, Canadian science fiction is at all something that might interest you). The controls, after an initial learning curve, were easy to use and very smooth. Portal (not to mention its sequel) is a very good game. The franchise has been remarkably successful, and has managed to do so without sexualizing its protagonist (apart from a few ill-advised fat jokes, courtesy of GladOS in Portal 2). In one fell swoop, Portal has shown that yes, we can have our cake and eat it too. 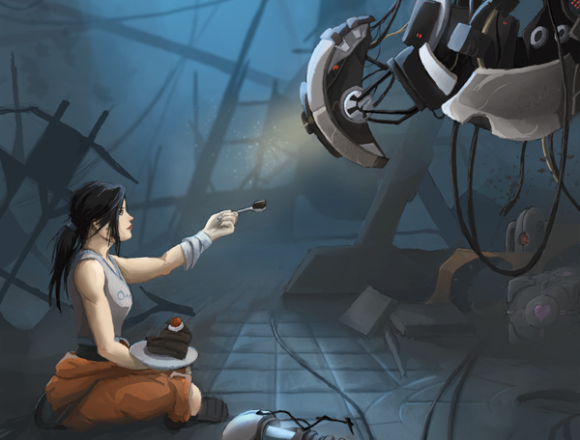